On Monday, 07 November, both of the children’s classes combined for their annual Lantern Walk festivities. For the first hour, classmates were very busy making their lanterns and practicing their lantern songs. Parents and siblings were invited to join in on making a lantern as well. It was quite the production and nice to see so many children participating. Before we headed outside, we talked about who Saint Martin was and why he is still celebrated today. Even though some of the children have only had German since September, it was great to see that they could give some key words back to the questions in German.

We were very fortunate to have a mild evening here in NH and everyone bundled up and headed outside as soon as it got dark. The children walked hand in hand, singing their lantern songs and holding their lanterns proudly in front of them as they walked around the block. It is exciting to have such a big activity and even more exciting that they could share it with their parents and siblings.

After our walk around the block, we came inside for refreshments that the parents provided. Some of the refreshments included traditional Weckmann and each child was give a ‘golden coin’ to end the day.

Martin was born in Hungary but lived later on in Italy. It is the year of 371 and Martin was a soldier in the Roman army when he became Bishop of Tours. He is best known for the account of his using of his military sword to cut his red cloak in two pieces to share it with a beggar clad only in rugs in the deep of winter. When he died his corpse was transported in a boat to the city of Tours as a cortege of light was set up to guide him for the last time.

On St. Martin’s day children in the North-West part of the Netherlands, in Germany and Austria participate in a Lantern Parade. 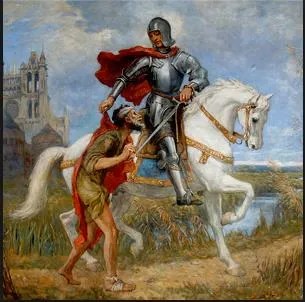 Often a man dressed as St. Martin rides a white horse in front of the Lantern Parade. Children sing songs about St. Martin and about their Lanterns. The food traditionally that day is a goose. According to the Legend, Martin was reluctant to become Bishop, which is why he hid in a stable filled with geese. The noise made by the geese betrayed his location to the people who were looking for him.

St. Martin is the Saint of many places, cities and countries in the world.